The $APW token was first distributed through a Liquidity Bootstrapping Event.

It is now deployed at the following addresses and available to trade on SushiSwap.

The APW token is an ERC-20 token, with a primary focus on protocol governance through the APWine DAO. The token follows a Curve-like form of voting escrow (veAPW) which has a Lock capability. Locking your APW for up to 2 years will yield an increased voting weight and share of protocol rewards. The longer you lock your APW, the more voting power you have.

The protocol aims to build a progressive revenue model featuring performance fees on top of futurized yield, as well as swapping fees on the yield derivatives traded on its custom amm. Other revenue flows will also be proposed as the protocol unveils its functionalities.

All the fees will be voted on and adjusted by the DAO through governance proposals.

Due to the liquidity mining following an inverse exponential curve, as described below, the maximum supply of $APW will never be effectively reached. By default and at the end of year 2, there will be a maximum of 32,624,947 $APW tokens in circulation, or around only 65.2% of the total supply — making the token more scarce and valuable. The emission of the token will be able to be ruled by governance proposals, adapting to the needs of the protocol.

A substantial part of the supply is set to be distributed during the upcoming Liquidity Bootstrapping Event, whose details will be unveiled in the coming days. This gives everyone a chance to have a stake in the project and its success while ensuring fair distribution amongst community members.

The funds raised during this event will be used to seed liquidity pools on decentralized exchanges.

This event will be the first opportunity to get $APW — There will be no tokens in circulation prior to it.

The Community allocation gathers Liquidity Incentives and Ecosystem funds and grants, including Airdrops.

Most of the Community allocation will be reserved for Liquidity Incentives, so as to bring liquidity providers and create the most liquid and usable market for Future Yield.

48% of the supply is planned to be minted following an inverse exponential curve, so that there are a fixed amount of $APW tokens to distribute every year, with a decreasing inflation rate.

These tokens will be distributed through a liquidity mining program on $APW pairs, along with incentives for liquidity providers on the APWine AMM. The team and the DAO reserve the right for these tokens to be dynamically allocated to specific incentives, depending on current needs and for the good development of the project. 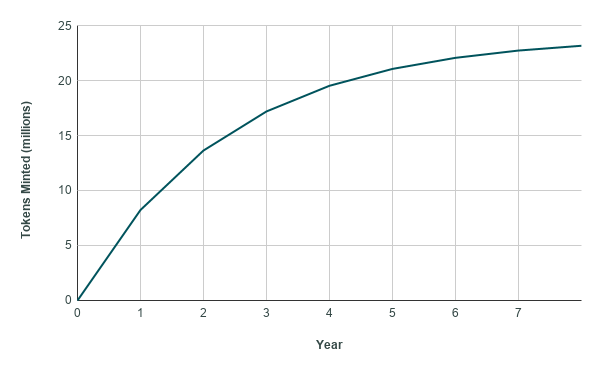 A portion of the Community allocation is dedicated to Ecosystem growth, in the form of strategic partnerships and grants for active and meaningful contributions moving the project and the DeFi space forward.

Airdrops are a way to both reward long-time supporters of the project, but also attract resourceful members from external communities.

In a matter of introducing APWine to new users, while giving our existing community a chance to participate in the governance from day one, we’ve decided to allocate a portion of the Community Fund to the Genesis Airdrop.

A selection of external users will have a chance to get a stake in APWine governance; including users from selected communities and valuable actors of the DeFi ecosystem.

The team, and all investors who have contributed to the project in its early days, have a vesting over multiple years as a commitment to the platform and its vision. The majority of the token supply is earmarked towards community growth, including liquidity incentives and ecosystem development. APWine is set to impose itself as one of the core building blocks of DeFi for Future Yield Tokenisation, and this feat takes planned, collective efforts to achieve.